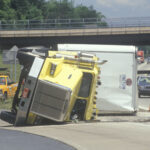 Who Can Be Held Liable in an Atlanta Truck Accident?

FAST FACTS: Fatalities in Georgia involving a large truck numbered 135 in 2014. Over 8% of all fatal crashes in Georgia in 2014 involved a semi truck. About 88,000 trucks were involved in fatal crashes throughout the US in 2014. Drive down the highway, and chances are good that you will see rubber scattered… Read More »

How to Drive Safely Around Semi Trucks in Atlanta This Summer

No matter where you drive in Atlanta, chances are that you will come into be sharing the road with a semi truck for at least part of your journey. This is especially true if you drive on highways. Knowing how to drive safely around these large trucks can help prevent an accident. A collision… Read More »

When a passenger vehicle is involved in a collision with a semi truck, substantial damage and serious injury often occur. Larger vehicles like 18-wheelers and dump trucks are more powerful than the average car or truck. A slight error on the part of the driver can have devastating consequences. In Atlanta, truck accidents are… Read More »

A person who was driving a semi truck was airlifted to a local hospital Friday, September 29 following an accident that occurred on I-75 near Rocky Face. The first 911 call, according to Whitfield County, came in just after 2:30 p.m. According to reports, a semi truck was traveling in the middle lane and… Read More »

Highway 316 was the scene of a multi-vehicle crash on July 12. The accident caused the highway to be shut down for several hours as crews worked to clear the scene. The accident occurred just before 10 a.m. According to reports, the accident involved a delivery truck, a semi-truck and at least two other… Read More »

One person lost their life and 17 other people sustained injuries in an eight-vehicle pileup on Georgia Highway 316. The accident happened in Lawrenceville and, of those injured, eight were children. According to officers that responded to the scene, there was a vehicle wedged under a tractor trailer. The vehicle was on fire by… Read More »

Georgia State Troopers are looking into a crash that occurred on Interstate 85. The crash involved a tractor trailer, a sedan and a Ford F-350 truck hauling donkeys. The accident happened just before 1 p.m. close to Exit 47. Three lanes were closed down for several hours as the accident was cleared. The vehicles… Read More »