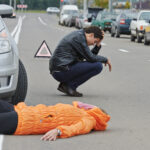 FAST FACTS There were an estimated 92 pedestrians killed in the first half of 2017. 0.8 pedestrians per 100,000 people were killed. Georgia is ranked 16th in the nation when it comes to pedestrian deaths. If you’ve driven down a neighborhood street in recent weeks, you may have noticed something that you had forgotten… Read More »

According to a report by the Governors Highway Safety Association released this year, Georgia is ranked 16th in the nation for pedestrian deaths. It’s dangerous for pedestrians out there; an estimated 92 pedestrians were killed in a six-month period in early 2017. The state is determined to curb the number of deaths by creating… Read More »

Next week could be one for unusual weather in Atlanta and the surrounding area. Forecasters are calling for multiple winter weather events from now until January 5. Any one of these events could cause roads to be dangerous as snow and ice fall from the sky. People in Atlanta are not typically used to… Read More »

In just five hours’ time, two people lost their lives while walking on a local interstate. Both accidents occurred on Wednesday. The first at approximately 6:30 p.m. and the second sometime around midnight. According to reports, a man was walking down the interstate at about 6:30 p.m. when he was struck by a motorist…. Read More »

Pedestrian Struck By Car Did Not Have Right of Way

A teenager was struck by a car on July 11. Atlanta police are saying that the teen did not have the right of way when she was hit. According to reports, a driver was traveling on Metropolitan Parkway in the southbound direction. The teenager is said to have darted into traffic and was struck…. Read More »

Pedestrian on Highway Struck by Vehicle

A female student from the University of Georgia was struck by a vehicle last Friday. The young woman was a senior at the University, studying both Spanish and microbiology. A local television news station reported that the woman had just finished the semester and was preparing to visit home. According to authorities, reports came… Read More »