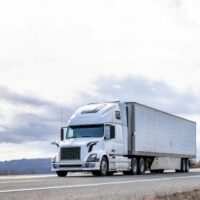 In 2021, a massive accident involving multiple vehicles and semi-trucks occurred on I-285 in Atlanta. The accident occurred on I-285 southbound, near the airport, during rush hour.  Witnesses report that the accident was precipitated when the driver of a truck either fell or jumped outside of the moving vehicle. The still-moving truck then went over an embankment, ran over a traffic sign, and ran head-on into the rush hour traffic on I-285. When the truck entered the highway, it was quickly struck by a semi-truck, a flat-bed truck, and an SUV. The semi-truck is said to have been transporting 10,000 pounds of candles, and the flat-bed truck was transporting lumber. The truck immediately burst into flames upon impact, and caused both the semi-truck and the flat-bed truck to quickly catch fire as well. The fire burned for over an hour and required all of the southbound lanes on I-285 to be shut down while crews responded to the overwhelming flames and wreckage. It took crews several hours to clean up all related debris and re-open the lanes to traffic. Miraculously, no major injuries were reported. However, one driver was treated for burns.

A number of other cars are said to have been affected by the truck and collisions, and the accident has officially been classified as a chain-reaction car crash by authorities. The driver of the original truck was transported to the hospital for treatment, but no details have been released about his condition. Police have also not made a statement as to whether he will be charged and what was responsible for causing the accident. It is unclear based on witness statements if the original driver was attempting to escape an out-of-control vehicle or if he was acting recklessly. It can be assumed that the investigation into this accident is ongoing.

Have You Been in a Chain-Reaction Car Crash?

Chain-reaction car crashes are among the most complicated to litigate. With so many drivers involved and an equally high number of conflicting accounts of events, the investigation to make a determination of liability can take months. If you find yourself in the aftermath of a chain-reaction car crash, by collecting any available evidence at the scene you can do what is within your power to help aid in the determination of liability. This involves taking photos and video of the damaged vehicles and scene of the accident, as well as collecting contact information from witnesses, and asking all of the involved drivers if they have dashcams.  If you have any injuries, seek medical attention immediately. The next step is talking to a lawyer as soon as possible.

Multi-vehicle collisions are among the most complex to navigate and to litigate. If you have been in a multi-car or semi-truck accident in Atlanta, Dunwoody, Alpharetta, Cobb County, Fulton County, Gwinnett County, Johns Creek, Sandy Springs, or the greater Georgia area, Hawkins Spizman Trial Lawyers are ready to help. Our lawyers will fight to get you the maximum amount of compensation in your case. Don’t put off getting help for another minute. Contact Hawkins Spizman Trial Lawyers and schedule your free consultation today with our Sandy Springs personal injury lawyers.

By Hawkins Spizman | Posted on April 4, 2022
« What’s The Difference Between a Concussion And A Traumatic Brain Injury?
Did Bad Vehicle Maintenance Cause Your Crash? »