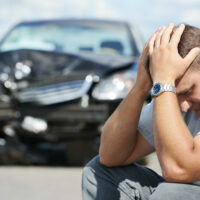 Car accidents can happen for any number of reasons, from natural events to distracted drivers. Unfortunately, the vast majority of wrecks happen due to human error. In 2015, there were a total of 385,221 crashes in Georgia, resulting in 1,430 fatalities and 19,405 serious injuries.

In 2016, there were 1,554 total traffic fatalities across the state. The 6 most common crash types that resulted in fatalities were:

At Hawkins, Spizman & Fortas, our Atlanta car accident attorneys know how devastating even a seemingly minor collision can be. Our experienced lawyers know how to get you the full compensation you deserve. Before you accept any offer from your insurance company, call us at 678-248-6572 or contact us online for a free, no-obligation consultation to see how much compensation our lawyers can get you.

Here are the 6 most common causes of fatal accidents in Georgia (note that multiple causes may be involved in a single wreck; as such, the fatality numbers will not add up to 1,554).

For example, if you crashed because of a manufacturing defect in your car, you may be able to find the car manufacturer liable. In other instances, the government may be responsible if a road defect caused the caused the wreck. Finally, if another driver, pedestrian or other person does something that causes you to swerve to avoid hitting them, and you hit a stationary object, that other person may be held liable.

In 2016, there were 179 fatal accidents involving semi trucks. Until this year, the interchange at Interstate 285 and Interstate 85 in Spaghetti Junction was the worst truck bottleneck in the nation. It was recently dethroned by an intersection in New Jersey, but three of the top 10 worst bottlenecks in the nation are still in Georgia.

Truck accidents in Atlanta are so dangerous because semi trucks are 20 to 30 times the weight of a passenger vehicle. It’s important to hire an attorney who’s experienced in fighting trucking companies and their insurers to make sure you get the full compensation you deserve.

Speeding accidents resulted in 266 fatalities in 2016. Traveling above the speed limit can be extremely dangerous. In fact, speeding can be just as dangerous as driving drunk. Driving too fast reduces your ability to react to obstacles in the road, and at certain speeds, safety features like airbags may not be as effective.

With so many people on Atlanta’s roads, it’s important to go the speed limit. Of course, driving too slowly on the highway can be just as dangerous as driving too fast. Maintain the speed limit and, if you are being tailgated, move over to the right lane if you can.

Rollovers caused 402 fatalities in 2016. While any car can be involved in a rollover accident, taller and narrower vehicles like pickup trucks, vans and SUVs are more likely to be involved. This is because these vehicles have a higher center of gravity, making them easier tip over.

Rollover accidents are most likely to happen on rural roads where the speed limit is 55 miles per hour or over. What’s more, driver behavior like distracted or impaired driving plays a significant role in these types of wrecks.

In 2016, there were 849 fatal accidents involving a roadway departure. Most often, these are single-vehicle accidents. Roadway departures are any accidents in which a driver crosses an edge line or center line. This may occur due to drowsiness, impairment, distraction or even an outside factor like an animal running into the road.

Intersections can be highly dangerous. In 2016, 362 people were killed in intersection-related accidents. Drivers may run a red light or a stop sign, or may rear-end another driver who’s stopped at an intersection.

In metro Atlanta, there are five intersections that are more dangerous than any others. These are:

Talk to a Car Accident Attorney in Atlanta Today

No matter the cause of your accident, if you are involved in a wreck that wasn’t your fault, you may be entitled to compensation. At Hawkins, Spizman & Fortas, our experienced Atlanta car accident lawyers know how to help you get the compensation you deserve.

After your wreck, you may be sent a settlement check from your insurance company. Before you accept it and end your chances for further compensation, call us at 678-248-6572 or contact us online for a free, no-obligation consultation to discuss your case at no cost and no risk to you.

By Hawkins Spizman | Posted on February 20, 2019
« Different Levels of Intoxication
How to Prove Fault in an Accident, According to Georgia Law »