Close Menu
Georgia Criminal Defense Lawyers > Blog > Car Accidents > How to Prove Fault in an Accident, According to Georgia Law 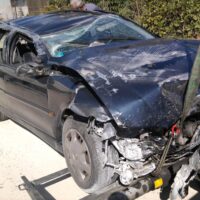 Having a successful personal injury claim is not easy, and it may even necessitate the services of someone experienced in the matter, such as a personal injury attorney in Atlanta.

One thing injury victims can do to help them strategize for their claim is to recognize the legal provings they must make in order to establish fault. Fault, sometimes called liability, in legal terms is a concept that rests completely on the facts and how the courts typically interpret those facts.

These three provings form the backbone of any personal injury case. You can learn about each one in more depth below.

Proving Negligence After a Car Accident

Negligence refers to any act that a reasonable person exercising ordinary care would have avoided, or foreseen and addressed. When driving, there are a number of acts that can point to obvious negligent decisions, including:

However, as you may have realized while riding in the car with an absent-minded driver, not everyone has the same perspective or experience during a car accident. Someone may not have realized they ran a red light, claiming it was still yellow, for instance.

If a situation regarding a car accident is under dispute, then police and attorneys must rely on physical evidence as well as eyewitness accounts. A lack of tire tracks can indicate that a driver did not brake before an accident, for instance, revealing that they may not have been paying attention to their surroundings. Eyewitnesses can also resolve a dispute as to who reached an intersection first, possibly revealing that someone failed to yield when they should have.

Proving that another driver or party was somehow acting negligent when an accident occurs is the first step in making a liability claim.

Establishing That Negligence Caused the Accident

A negligent act in isolation does not always cause property damage or an injury. Injury victims seeking a claim, therefore, must establish that the other party’s negligent acts directly led to the car accident.

Since Georgia is a “modified comparative negligence” state, attributing other causes to an accident can allow a defendant to reduce or entirely negate the damages they are liable for. Georgia Code § 51-12-33 states that plaintiffs can only receive the portion of their total damages that was caused directly by each defendant.

So, for example, if a speeding driver was deemed 25% responsible for an accident while a jaywalking pedestrian was considered 25%, then each negligent party could only be compelled to produce 25% of the damages.

If the injured plaintiff is determined to be 50% or more at-fault for their own injuries, then no liability claim can be brought forth.

Connecting the Accident to Injury Costs and Other Damages

Defenses may sometimes allege that an injury was not caused completely by an accident in some cases. For instance, if a victim has a history of back injury, then back injuries from the car accident could be argued to have been made worse by the patient’s medical history rather than the accident itself.

The defense may also argue that a victim spent money on treatments that they did not need or that did not have a direct correlation to their accident injuries.

Injured plaintiffs must be prepared for these defenses and able to refute them using hard evidence and clinical documentation. They must also be careful to not discuss health details with insurance adjusters and others representing the defending party. Otherwise, they may have personal health information used against them to dispute their medical damages.

Understanding the legal principles that govern fault and negligence findings in Georgia can be complex. Insurers may use this complexity against you, disputing their client’s liability or trying to offer you an unfair settlement for your injuries. You may also find your own liability questioned, forcing you to prove that you were not at fault for your own injuries.

Having a personal injury attorney in Atlanta represent you can reduce the stress placed upon you to assert your claim and provide the needed evidence to back it up. A lawyer can negotiate with insurers and take all the needed legal steps to advance your claim to a lawsuit if no one makes a fair settlement offer.

If you have been injured in a car accident, know that you don’t have to bear the hefty burden of proving fault alone. You can reach out to a knowledgeable injury attorney today and schedule a free, no-obligation consultation. Call us at Hawkins, Spizman & Fortas today or contact us online to schedule your appointment now.

By Hawkins Spizman | Posted on February 25, 2019
« The 6 Most Common Types of Fatal Car Wrecks in Georgia
Thursday Night Fight between Cleveland Browns and Pittsburgh Steelers »