What Is Negligence Per Se? 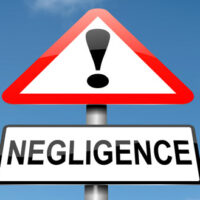 If you were injured in an accident that was not your fault, there is a good chance that another party’s negligence was to blame. You may be surprised to learn that the vast majority of vehicle accidents are caused by one driver’s negligence, as opposed to natural factors such as slick roads or inclement weather. This is relevant, because if you can establish that the other party involved in your accident was driving negligently, you are very close to also establishing that they were liable for the accident and all of the damages you suffered as a result. This is because in Georgia, any driver who is found to have violated the “Uniform Rules of the Road” can be found negligent per se.

A driver is negligent per se (or, negligent as a matter of fact) when they are found to have violated any of the Uniform Rules of the Road. These rules include things like having to obey the speed limit and street signs and not to pass other vehicles. If the driver who hit you was driving recklessly or engaging in any of these behaviors they are basically considered to have been driving negligently as a matter of fact. In most negligence cases, the jury will have to review the facts and circumstances of the case in order to determine whether the party was adhering to a reasonable standard of care or if they breached the standard of care that would reasonably be expected (which would be negligence). However, if the party can be shown to have broken one of these rules then the jury will not have to spend time determining whether they were acting reasonably because negligence will be automatically assumed. In Georgia, however, unlike other states, this is not a done deal. Negligence per se instead creates a rebuttable presumption of negligence. This means that while negligence will be assumed, the other party can still try to overcome the assumption. You will also still have to establish that the other driver’s negligent conduct was the actual and proximate cause of your harm. This will generally be fairly easy to do. For instance, it is not hard to demonstrate that a driver’s intoxication or speeding resulted in them colliding with your vehicle. Often police and accident reports will help establish this connection. It should be noted, however, that even if the police did not issue a ticket or citation to the other party for a driving violation, you can still assert that one occurred. You will just have to be prepared to present evidence supporting your claim that the other driver was operating their vehicle in violation of one of the Uniform Rules of the Road.

If you have been involved in a car accident, or any kind of accident, in Georgia, that was not your fault, you do not have to shoulder the burden alone. Serving Atlanta, Dunwoody, Alpharetta, Cobb County, Fulton County, Gwinnett County, Johns Creek, Sandy Springs, and the greater Georgia area, Hawkins Spizman Trial Lawyers are ready to fight to get you the compensation and support that you are entitled to. Contact our Dunwoody personal injury lawyers today to schedule a free consultation.

By Hawkins Spizman | Posted on February 10, 2022
« Hospital Slip-And-Fall Accidents
Can I Get A DUI Urine Test Thrown Out? »