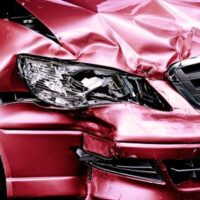 A tragic three-vehicle collision has left a 22-month-old girl dead, her mother fighting for her life, and the greater Atlanta community shaken. The accident took place shortly after 9:00 p.m. on Georgia route 41, near Haynes Road, in Coweta County. According to Georgia State Patrol officers, a 30-year-old man was driving a large SUV north on Ga. 41, when his vehicle swerved into the lane of oncoming, south-bound traffic. Officers say at that point the 30-year-old man, identified as Jose David Diaz of Austell, immediately collided with two oncoming cars in the southbound lane. The first vehicle that Diaz collided with was an SUV carrying six people. Diaz only side-swiped the SUV, as the driver swerved to avoid him and amazingly no one inside the SUV was injured. However, that put him directly in the path of 21-year-old Jada Jackson’s Kia Forte. Jackson’s daughter, Samia Williams, who was just two months shy of turning two years old, was killed in the backseat of the car.

Jackson was transported via helicopter to a local hospital with life-threatening injuries, and she remains in the intensive care unit there fighting for her life. A man who was sitting in the passenger seat of Jackson’s car is also said to have sustained injuries. Diaz is said to have suffered comparatively very minor injuries in comparison to the other victims and was booked into jail the following morning. Police have stated that they believe he was intoxicated at the time of the accident, and an open container of alcohol was allegedly found in his vehicle. He is currently facing charges of vehicular homicide, serious injury by vehicle, failure to maintain lane, and DUI less safe, in addition to an open container violation.

How a Lawyer Can Help

While legal means and financial matters are likely the last thing you want to think about at a time like this, it’s often inescapable with mounting medical expenses. A lawyer can help you determine the best path forward to financial recovery. The civil court system is designed to restore victims to the position they would have been in financially had the accident never occurred. Evidence that the other party was violating the law, such as by driving drunk, further bolsters your case and creates a presumption of negligence for that driver which is very hard to overcome.

If you have been seriously injured or lost a loved one in Atlanta, Dunwoody, Alpharetta, Cobb County, Fulton County, Gwinnett County, Johns Creek, Sandy Springs, or anywhere in Georgia, in a vehicle collision that was not your fault, you do not have to bear this burden alone. The experienced personal injury attorneys at Hawkins Spizman Trial Lawyers will provide compassionate and thorough representation to make sure that the responsible individuals are held accountable and that you receive the maximum amount of compensation that you are entitled to. We will take care of the legal things so that you can focus on mourning, healing, and starting the difficult process of piecing your life back together. Contact the Cobb County personal injury lawyers at Hawkins Spizman Trial Lawyers today to schedule a free personalized consultation.

By Hawkins Spizman | Posted on January 28, 2022
« Were You Ejected In A Car Accident?
What Happens If I Violate My Probation In Georgia? »