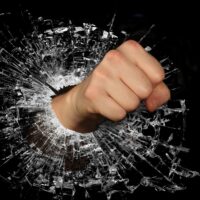 Many people are familiar with the term “assault and battery,” and mistakenly interchange the two terms. The crimes are not one in the same as far as Georgia law is concerned. Assault and battery are separate crimes, and are further broken down into “simple” and “aggravated” offenses. The following is a brief description of each crime:

A person can be charged with simple assault when they attempt to inflict violent injury on another or put another in a situation where they would have reasonable belief that they were going to sustain violent injury. A person does not have to physically touch another to be charged with the crime. For example, a person can threaten to break someone’s arm in a menacing manner and be charged.

A conviction of simple assault has serious consequence. The convicted party faces a year in jail and a maximum fine of $1,000. There may also be probation involved and the judge may order restitution if applicable. If the simple assault is elevated to “high” or “aggravated,” the penalties increase. An assault may be elevated if the victim was a pregnant woman, a public school employee, or was committed against a family member.

The penalty for an aggravated assault conviction is between one and twenty years in prison along with fines and the possibility of having to pay restitution.

A person convicted of simple battery faces up to a year in jail, a maximum fine of $1,000 and restitution payments. Like assault, the charge of battery can be elevated depending on the nature of the crime. If the victim was a police officer, a pregnant woman, a school employee, a caregiver, over 65 or pregnant, the crime can be elevated. It may also happen if the crime was committed against a family member.

Battery is considered aggravated when there is serious bodily injury. For example, a person may intentionally strike someone in the face and be charged with battery. If the strike to the face causes serious disfigurement, the charge would be aggravated battery.

The penalty for a conviction of aggravated battery is one to 20 years in prison, high fines and restitution to the victim.

Civil Assault and Battery in Atlanta

There are some crimes which are also civil torts. A tort is some type of wrong that causes damage to another person. Assault and battery are deemed to be intentional torts. An intentional tort is different from others because those called “regular” are based upon negligence, error or recklessness. If a person has a duty to someone else and they are negligent in that duty, the have committed the tort.

An intentional tort, on the other hand, has no negligence or carelessness involved. Instead, the person who committed the tort did so with a goal. It may have been to frighten or injure someone. The person’s intent is taken into consideration in both criminal and civil court. Let’s look at an example.

Negligence: A person is jogging toward you on the sidewalk. You’ve made eye contact with one another so you are sure that they have seen you. As they approach you, they reach down to change the song playing on their smartphone. Their inattention causes them to run into you, knocking you down and causing you to break your wrist. This is a general act of negligence.

Intention: Imagine the same scenario with a slight twist. As the jogger approaches you, they don’t look down at their cell phone, but instead, start yelling at you to get off the sidewalk and out of their way. You refuse to move so they run through you, shoving you down and resulting in you breaking your wrist. This is an act involving intent.

The difference in the two scenarios is that in the first example, the person did not mean to knock you to the ground, they were simply not paying appropriate attention to what they were doing. In the second example, the jogger may not have intended to break your wrist, but that’s what their intentional actions resulted in.

What It All Means

Our Atlanta Assault and Battery Defense Attorneys are Here for You

When you are accused of a crime, you need someone to aggressively represent your rights. If you have been charged with assault or battery, you need an attorney you can trust. Reach out to our Atlanta assault defense and battery defense lawyers for assistance. We will review the details of your case and advise you of your legal rights and options. Your first consultation will be held at no cost to you.

By Hawkins Spizman | Posted on August 15, 2018
« Everything You Need to Know About Ignition Interlock Devices
School Zone Safety Tips for Pedestrians and Drivers »